The Conference theme was consisted of three blocks:

More than 60 participants from different background actively contributed to the discussions created within the scope of the conference, which were related to the topics of the panel discussion, the presentation of the research findings, and the announcement of the upcoming report of the regional research study. The speakers at the panel discussion were Ivana Tufegdzik – Member of the Parliament of the Republic of Macedonia, Gjulten Mustafova – State Counsellor of non-discrimination and human rights at the Ministry of Labour and Social Policy of the Republic of Macedonia, Irena Cvetkovikj – Executive Director of the Coalition “Sexual and Health Rights of Marginalized Communities”(SHRMC), and Jasna Orovchanec Arangjelovikj – Project Coordinator at the Macedonian Young Lawyers Association (MYLA). 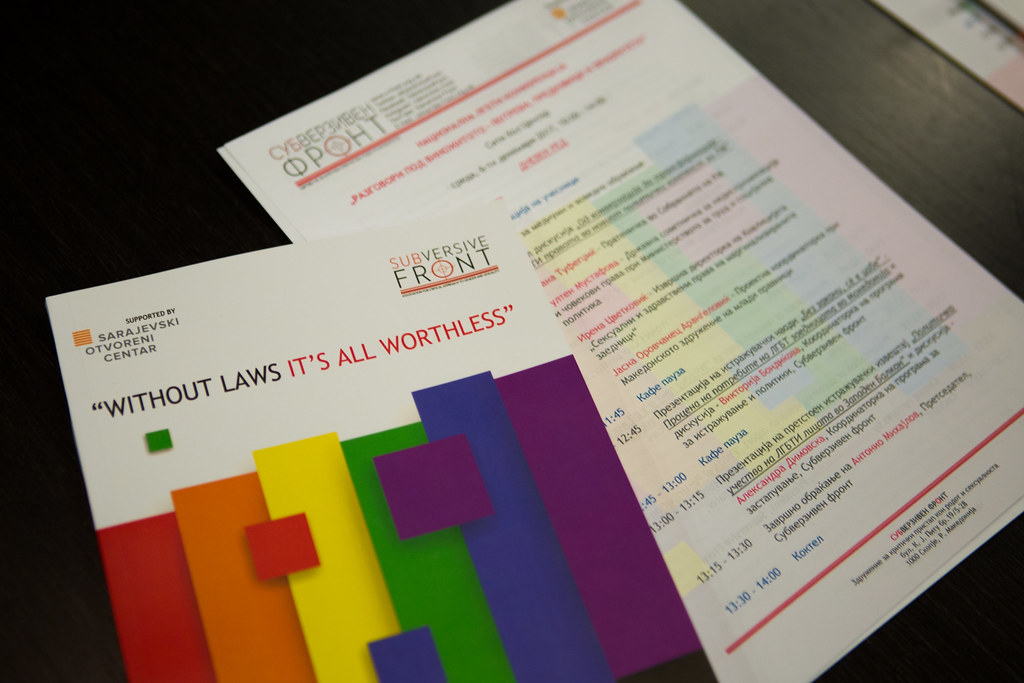 Several ideas were brought up on the issue of utilizing the new opportunities for advocating for LGBTI equality in the new political context in the country. The MP Ivana Tufegdzik stated that LGBTI rights are not a set of certain, special rights, but are part of the wider corps of human rights that are universal for everybody. She made a distinction between the public, political role the MPs and the other decision makers have and their own, personal views and opinions that might affect their actions at the extent of a whole social group that is often vulnerable and marginalized. She mentioned that even with the adoption of a new, inclusive legislation, there will be problems in the acceptance of the LGBTI people in society, which can be further worsened with the lack of implementation of such legislation. She clearly noted that lack of competency of the current State Commission for Protection against Discrimination which she thinks it has become a “commission for discrimination”. Finally she mentioned that very often the younger, the less-experienced MPs base their decisions on the political calculations and gains they might have when voting in favour of a law or a policy, whereas the older, more experienced MPs, such as Branko Manoilovski from DUI, can more freely and more publicly support policies and ideas that are seen by many as unconventional and non-traditional, such as the same-sex marriage.

The State Counsellor Gjulten Mustafova stated that the inclusion of the LGBTI people in the vision of the National Strategy on Equality and Non-discrimination adopted in May last year is one of the biggest successes of the Ministry of Labour and Social Policy, that has come after a set of intensive lobbying efforts. In 2016 was also the working group formed whose mandate is to work on the new Law on Protection and Prevention against Discrimination. The new Law, set to be presented in the Parliament by March 2018, will now include the grounds of sexual orientation and gender identity (SOGI) as protected grounds of discrimination. The new Law will not include in its text marriage as an exclusion of discrimination, as marriage is defined in the Family Law. The new Law also proposes professionalisation of the State Commission for Protection against Discrimination, meaning the Commission members will not be able to work for any other institution or organisation, and will have 8 working hours a day 5 days a week to fulfill as part of their public function within the new proposed structure of the Commission. According to the new Law, the length of the mandate of the Commission members will be 3 years and 5 years, which will help build the institutional memory of the Commission, and will enable easier transition between the old and new members. The new profile requirements for the Commission member candidates will be 7 years of working experience in the protection of human rights out of which 5 years working experience in the protection against discrimination. Furthermore, the new Law stipulates holding a public hearing in the Parliament on the election of new members of the Commission. The Commission will also now be able to issue General recommendations, in addition to the Opinions on the Complaints for discrimination submitted to it. The Commission members will also now have to consider every complaint for discrimination submitted to them, losing the right so far they had to decide not to work on every complaint they receive on the premise that the said complaint will not serve the purpose of the work of the Commission. Among the proposals of the new Law are the ones that allow for the Commission to initiate a Misdemeanor court procedure in case the discriminator has not acted upon the recommendations and opinions of the Commission, nor respected the legal deadlines. The new Law will also use the method of situation testing and statistical data as proofs of discrimination. The new Law will also enable the CSOs to undertake actio popularis (lawsuit of public interest) in cases where discrimination has been committed against a bigger number of people or a group of people, so that approval of each one of the persons discriminated against will not be required. The misdemeanor fines for discriminators have also been increased, for both legal (from 500 to 5000 EUR) and natural persons (from 100 to 500 EUR). In cases where the discriminator is en elected official at local or national level, the misdemeanor fine shall be between 500 and 1000 EUR.

Irena Cvetkovikj of the Coalition SHRMC stated that it had taken 7 years of strong efforts to address the urgency of amending the existing Anti-discrimination Law, especially on including sexual orientation and gender identity as protected grounds of discrimination not only in showing political will but also in encouraging the LGBTI people to report the violations of their human rights. She stressed the need for having the political will for introducing and adopting inclusive legislation as well as having emancipated and encouraged members of the LGBTI community and the wider society. The open support by the government, the local authorities, and the ministries show a very positive signal to the members of this community, in addressing and solving their burning issues and needs. Irena mentioned an example of how a trans child at the age of 17, when they saw the Prime Minister Zoran Zaev at the celebration of the 5th birthday of the LGBTI Support Center, asked for his help in changing the gender marker in their ID documents, which shows the change of the perception of the state institutions by the LGBTI community members from untrustworthy to trustworthy and able to fulfill their responsibilities as stipulated by the laws and the Constitution. Irena mentioned the worrisome situation with bullying and harassment against the young LGBTI people in schools, the existing homophobic and transphobic content in some of the schoolbooks in the higher education in Macedonia, as well as the homophobic and transphobic remarks by some of the university professors. She called upon the Ministry of Education, and the higher education institutions to open their doors for the LGBTI CSOs and activists to provide them their support and expertise and to jointly build a better and more promising future for the younger generations. Finally she clearly stated the need to address LGBTI issues and needs in the media content, especially in regard to producing and promoting media content that is inclusive, educative, and informative about the lesbian, gay, bisexual, trans* and intersex people.

Jasna Orovchanec Arangjelovikj from MYLA informed on the 25 September 2017 verdict by the Administrative Court on allowing a trans person to have their request for legal change of the gender marker in their ID documents be made by the local authority on administering the births’ registry books, first of its kind. The new political context has in her opinion positively affected the willingness among the court personnel to consider the cases of requesting legal gender change in the ID documents, which still gives an opportunity for the LGBTI activists to work with the courts and judges in Macedonia on the safeguard of the human rights of the LGBTI people. Within the scope of the strategic litigation of cases of discrimination before the courts in Macedonia, MYLA has won 15 cases where the courts have found discrimination within the last 7 years since the Anti-discrimination Law was adopted in 2010. She emphasised that all people are equal under the laws and everybody should have equal access to justice and the protection of their rights everywhere, whether that is at the workplace, in schools, at the hospitals, and such, regardless of their sexual orientation and gender identity, and despite the stereotypes and prejudices that are prevailing in Macedonia.

In more concrete ways of utilising the opportunities in the changed political context, MP Ivana Tufegdzik suggested that the LGBTI organisations can now use the working bodies of the Macedonian Parliament such as the Standing Inquiry Committee for Protection of Civil Freedoms and Rights, and the Committee on Equal Opportunities for Women and Men. She also mentioned that the funds of the state budget under the budget item “Transfers for civil society organisations” are now also available to the LGBTI CSOs in Macedonia. Jasna Orovchanec Arangjelovikj emphasised the need to use the courts as a mechanism for protection of the fundamental rights which has shown as one of the most effective tools in doing so, by calling the LGBTI community members to more bravely report the violations of their human rights and to more often seek protection by the relevant state authorities and the LGBTI CSOs.