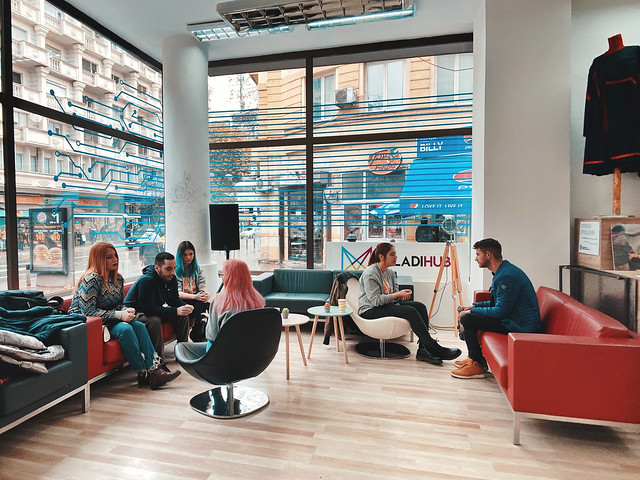 The project of “Storytelling & Living Library” consists of a short training, finalized by an event, the main target is equipping its students with skills derived from the methodology of storytelling and living library. Some of these skills include public speaking, active and attentive listening, breaking prejudice and stereotypes through interactive dialogue etc. The project itself spanned over a period of six days (25.11 – 30.11), of which the first five days were dedicated to the training and the last, ie sixth day was the “Living Library” event.

The library was in the disposal of 10 books, one of which is the trainer who took part in the event as a book. The training was structured in a way that would initially help the participants form a bond and create a safe space where they would be able to share, but also learn. On the first day, the trainer guided the participants in forming a productive and interactive atmosphere through the help of group ice breakers, exercises to spark creativity and encourage asking questions. Many of the exercises used are ones typically found in storytelling workshops that include paying mind to body language, utilizing space through different movements and actively listening to the interlocutor.

The following two days (26-27.11) were dedicated to learning theory and methodology in the field of storytelling. This was done by looking at classic examples, where the participants were instructed to recognize the structure of the story and find a way to include it in their own work. A more practical way for them to capture the spirit of storytelling was done with a simple exercise. The participants had to write their own stories, based on previously assigned topics, and later on, present their work to the rest of the group. During the presentations, every speaker had to uphold the structure of the story, while simultaneously incorporating imaginative elements and engage their audience. This segment was followed by discussions, constructive feedback, questions and comments from every member of the group and later on polished by the trainer.

The fourth day was completely focused on helping the participants prepare themselves as books for the living library, this includes titles, descriptions and stories. The task was to be able to compartmentalize their personal stories in a limited time frame while taking into account everything they had previously learned about the art of storytelling and leaving room for questions from the listener. This was the point where the books reached their peak confidence and were able to freely share their stories without feeling they were restricted by rules, seeing as how they internalized everything they had learned. They were highly successful in mastering every component needed to become an informative book and an engaging storyteller.

On the penultimate day of the project, the participants met their dedicated volunteers and space where the event would take place, Mladi Hub. Each volunteer was responsible for two books, meaning keeping them on schedule, ensuring that each book felt comfortable and anything else that the book may need on the day of the event.

The event itself was a big success, with the librarian keeping track of each visitor coming in and offering them a title from our lovely little selection of books. Immediately, a cosy atmosphere was formed as each curious reader stepped up to their appointed book and carefully listened to the story, asking questions along the way and feeling comfortable enough to share similar experiences. The readers were only too happy to take memorabilia of the event such as sweatshirts and bookmarks and many of them were eager for the next “Living Library.”